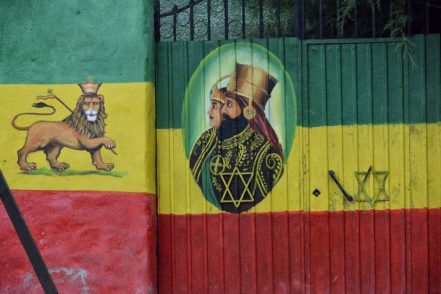 Marcus Garvey (1887-1940) was a political activist who gave Afro-Jamaicans a prediction in 1920 ~  that a future king in Africa would be their redeemer. The crowning of Emperor Haile Selassie (1892-1975) in Ethiopia in 1930 therefore acquired theological importance and they became his followers from afar. Despite Selassie refuting their claims that he embodied the ‘Second Coming’ and asking them not to emigrate to Africa, they formed the Rastafari religion, taking the title from Selassie’s pre-coronation name.

Without any group leadership, Rasta practices and beliefs took time to coalesce. A few more Afro-Caribbean activists published treatises and the Rastafari held ‘reasonings’ in which they would smoke cannabis, have debates and choose parts of the Bible to support their ideas. The Rastafari want to change Western society (‘Babylon’), since they believe white people and women are subordinate.

This came to the UK in the 1950s-1960s with Jamaican immigration and reached its peak of public attention in the 1970s, coinciding with the popularity of Rasta reggae artiste, Bob Marley (1945-81), whose lyrics describe Rasta hopes and beliefs. After the political toppling and subsequent death of their deity, Selassie, and the early death of Marley, British Rasta numbers diminished, but Rastafari has left its cultural mark.