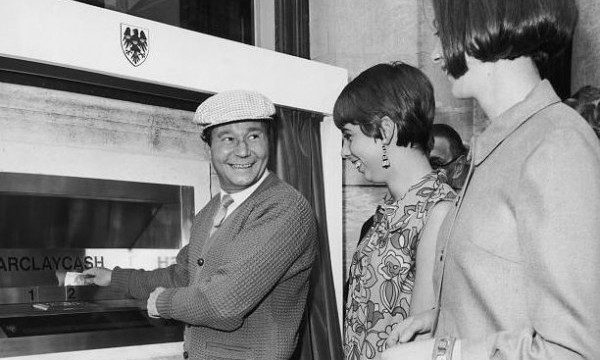 Cash machines,  or Automated Teller Machines (ATMs), were invented by James Goodfellow (1937-) of Renfrewshire. His employer, Kelvin Hughes of Glasgow, asked him to come up with a machine that could dispense cash at any time. Bank branches were only open on weekdays until 3pm, so there was a big demand for this type of facility.

There was a race to produce the first cash machine, but Goodfellow was the first to file a patent, which he did in May 1966. His machines were then launched by the National Westminster Bank in 1967. This was before the computer age, so Goodfellow had also invented a plastic card and Personal Identification Number (PIN) system which operated via punched holes.

Unfortunately, Goodfellow’s achievement has only recently been recognised. He did not make any money from it, but he did eventually receive an OBE in 2006 for services to banking. It was long thought that John Shepherd-Barron (1925-2010), born in British India, had been the inventor of the ATM, with Barclays Bank installing the first machines. The above image shows comedy actor Reg Varney (1916-2008) officially, as it was thought, becoming the first person to use a cash machine, also in 1967.