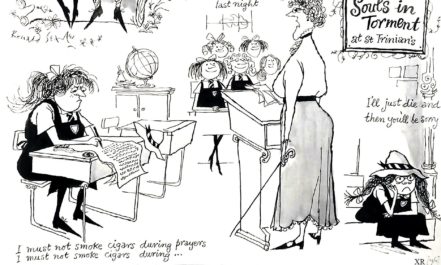 Boarding schools are a perfect setting for children’s fiction in which to celebrate the resilience, heroism and ingenuity of the younger generation. St. Trinian’s girls’ school, the creation of Ronald Searle (1920-2011), took this to a comic extreme which all ages could enjoy. It was a parody of an alternative type of school in which attendance at lessons is optional, such as the Summerhill school in Suffolk, founded in 1921, which courted a fair amount of criticism in Searle’s time.

His version of a school-gone-wild was introduced in a cartoon series in the early 1940s, followed by several books. There have been seven films, of which the most notable are:

The comedy was derived from the unbridled mayhem and anarchy in the school. The girls in the lower Forms were adept at bomb-making and sabotage, and the 6th Formers constantly failed their exams as they were too busy drinking, smoking, gambling and practising their feminine wiles.