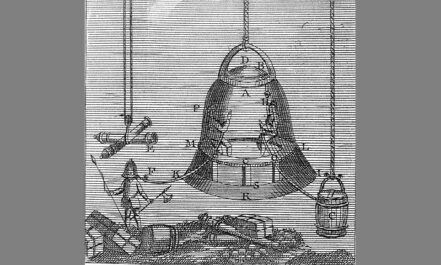 Dr. Edmund Halley (1656-1742), of comet fame, lived in the era of seafaring buccaneers who sometimes sank to a watery grave with their treasure. If this happened near the coast, adventurers might dive for salvage but this was dangerous. Halley’s development in 1691 of a diving bell with an air replenishment system allowed divers to explore for up to 90 minutes at depths of 20-60ft..

The ‘bell’ was a lead-covered wooden cone, open at the bottom, with a bench around the inside. Due to water being held at bay by the trapped  air, two men in ordinary clothes could sit inside and operate the weighted barrels of air and leather tubes for a third man, the diver. Along with his diving gear was a helmet, also designed by Halley, which was supplied with air by the tubes. The barrels were relayed up to a boat where they were refilled. Messages could be sent with the barrels on a lead block inscribed with an iron stylus.

In 1788/9, Yorkshireman John Smeaton (1724-92) added a force pump at the top to mechanise the air supply. Smeaton was ‘the father of civil engineering’ and had many bridge-building projects, so the issue cropped up as a matter of efficiency.