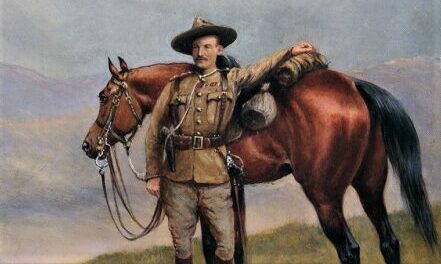 Lord Robert S.S. Baden-Powell (‘B-P’, 1857-1941) was born in London but always enjoyed being outdoors, immersed in nature. He joined the Army, served in Africa and India, and worked his way up the officer ranks for 34 years. His experience led him to write many practical books on tracking, surveillance and survival skills, his first being ‘Reconnaissance and Scouting’ (1891) aimed at other officers.

After running a trial camp for 22 boys in 1907 on Brownsea Island, Dorset, he wrote ‘Scouting for Boys: A Handbook for Instruction in Good Citizenship’ (1908) and from this sprouted the Boy Scout movement. It became popular very quickly and numerous boy scout troops were set up by enthusiastic adult volunteers. However, the London regional leader, Sir Francis P. Fletcher-Vane (1861-1934) from Dublin, seceded a sizeable membership into the affiliated ‘British Boy Scouts’ in 1909 as he feared B-P’s main organisation was becoming too militaristic.