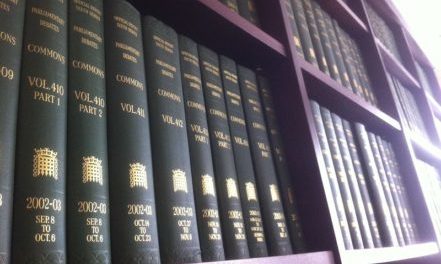 Thomas Curson Hansard (1776-1833) was in the right place at the right time when he was able to buy out William Cobbett’s shares in a parliamentary reporting business in 1812. Not only did he continue the successful format of ‘Cobbett’s Parliamentary Debates’, eventually re-naming it ‘Hansard‘ in 1829, but he also inherited Cobbett’s parliamentary archive dating as far back as 1066. The business remained in the Hansard family until 1888.

Newspapers such as The Times sent reporters to make shorthand notes on what MPs said and Hansard collated these publications, checked them against each other and against copies of speeches supplied to them by the MPs. Not until 1878 did Hansard have its own reporters. At no time did it claim to be a word-for-word account, but it became highly respected as the most comprehensive, impartial, edited record of debates in both parliamentary Houses.

In 1909 Parliament decided to employ its own reporting staff and Hansard became ‘the Official Report’. Today, a team of sixteen reporters take it in turns to occupy two seats above the clock behind the Speaker for 5-10 minutes each in a relay system. Audio recordings and their own observations are then typed up and are available on the Hansard website within hours.