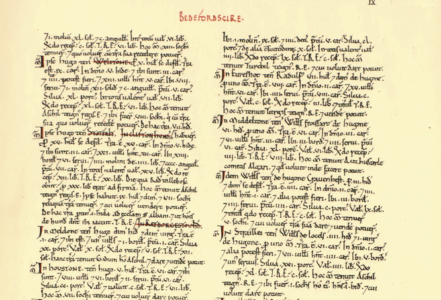 The invasion of Britain by William the Conqueror in 1066 was devastating for the English nobility, because he proceeded to confiscate almost all of their land, kept 20% for himself and gave all but 4% of the remainder to his supporters. The north of England was laid to ruin and people starved to death.

In December 1085, William decided to put his final stamp of authority over the country by ordering an accounting record of all the land, buildings, equipment, farm animals, landowners and serfs. This made tax collecting more efficient, although with no surnames yet, some peope were simply described as “man” or “two girls”. It was, however, the first nationwide data collection exercise, completed in just seven months, and it became known as the Domesday Book because it resembled a list prepared for ‘the day of reckoning’.

The original Domesday Book is held at the National Archives in Kew. There are two books, in fact ~ the neatly presented ‘Great Domesday’ and the more jumbled, unedited ‘Little Domesday’. Both are written by hand on parchment and in Latin. The City of London, Winchester, Hastings and other big towns are not to be found in the Book, since they were tax-exempt at the time.