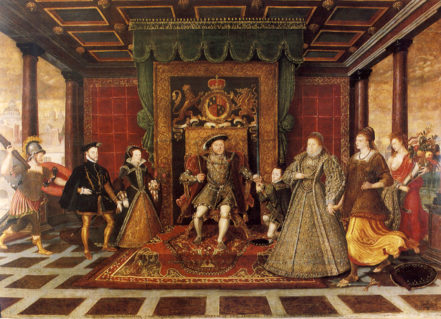 King Henry VIII (1491-1547) was married six times. Three of those marriages were annulled and two of the wives were beheaded. All of the wives were related in some way and most of them knew each other previously. His last wife’s mother, Maud, was a lady-in-waiting to Katherine of Aragon, his first wife, and named her daughter after the Queen.

His first marriage lasted twenty-four years, but problems began when Henry was approaching the age of forty and was attracted to various young ladies-in-waiting. Henry had a daughter, Mary, with Katherine of Aragon but he dearly wanted a son to carry on the Tudor royal line.  Enter Anne Boleyn, another of Katherine’s ladies-in-waiting. Unfortunately, she only produced another daughter, Elizabeth.

It was the third wife, Jane Seymour, lady-in-waiting to both Katherine and Anne, who bore a son, Edward, but she died doing so. The fourth wife, Anne of Cleves, was a political choice but the marriage was annulled after just six months. The fifth wife, Kathryn Howard, was thirty years younger than Henry. She was beheaded for adultery. The sixth wife, Katherine Parr, looked after him and his children and ensured that the girls were put on the line of succession.