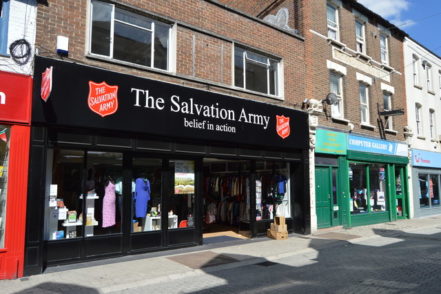 The Salvation Army is otherwise known as ‘the Sally Army’ in the UK, where it has around 50,000 followers. It was founded in 1865 by William and Catherine Booth in East London as a ‘mission’, before evolving into the Salvation Army in 1878. Once the name ‘Army’ was adopted, it determined the organisation’s structure. William Booth was its first General. The clergy titles are army ranks, all the way down to cadets. They wear uniforms with épaulettes and their churches are called citadel corps.

The Salvation Army has a strong evangelical purpose and is well-known for going into deprived areas and pubs in an effort to spread its message of following the teachings of Jesus Christ. Pub landlords have had Salvationists arrested for alleged interference with their right to conduct a business, since they are against the drinking of alcohol.

Originally for protection from physical attack, the brass band is another feature of the Sally Army’s ventures out to engage with the public. Their work includes running charity shops, refuges and rehabilitation centres and they have bases in over one hundred countries. One of their slogans is ‘the three Ss’..