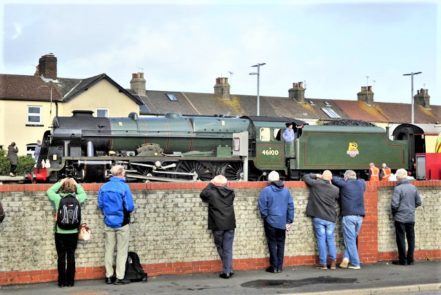 When steam trains were the new, exciting mode of transport around the country, they drew great admiration and interest. Those people intrigued by numbers and with time to spare were able to take this interest further, since every locomotive bore its own number and sometimes a name. Collecting these identifiers in a record book became known as the hobby of ‘train spotting‘.

It began in the 1920s, but really picked up steam after WW2. Ian Allan, OBE (1922-2015) was working in the office of Southern Railways and was dealing with so many requests for locomotive information that he decided to put it all in a booklet, ‘ABC Southern Locomotives‘, in 1942. Its success inspired him to form Ian Allan Publishing Ltd., which went on to specialise in various types of transport publications for enthusiasts.

In the 1960s there was another surge of popularity as steam was being replaced by diesel and electric, and people wanted to catch as many sightings of the old engines as possible before they disappeared. Spotting requires patience and spotters equip themselves accordingly. Adult spotters have tended to be regarded as ‘anoraks’ (loner experts) but there is currently an app to facilitate a new train spotting community.