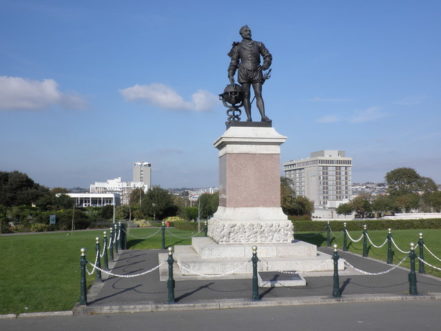 The main achievement of Sir Francis Drake (1540-1596) was to sail around the world in 1577-80, but there is also a suggestion that he was one of the explorers who saw giant humans on the coast of North America. These were red-haired and over nine feet tall. What is more well-known is that the Spanish viewed him as a pirate, a thorn in their side, whilst to the British he was a swashbuckling hero who brought home enough gold to pay off the national debt and more.

Drake’s seafaring adventures began in the early 1560s and by 1568 he was a ship’s captain. After a series of successes against Spanish and Portuguese ships, Drake set off west in 1577 to find a new shipping route to Asia. After quelling a mutiny and losing his four companion ships, he rounded the tip of South America in the Golden Hind and was the first Briton to enter the Pacific.

He travelled up the west coast, plundering Spanish-held ports as he went and filling the ship with treasure. He continued north in the hope of finding a western passage round the top of North America. Failing in this, he turned back and continued westwards.