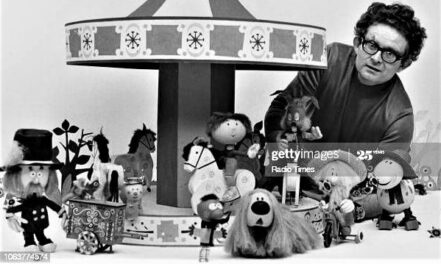 ‘The Magic Roundabout‘  was a children’s programme aired from 1965 to 1977, with a 5-minute slot every weekday before the News. This meant it also gathered a large adult audience. People appreciated the subtle humour of the script, written and voiced by Lincolnshire-born Eric Thompson (1929-82).

The stop-motion films of puppet figures in the brightly-coloured Magic Garden were made by Frenchman Serge Danot, assisted by Yorkshire-born animator Ivor Wood (1932-2004). ‘Le Manège Enchanté’ (1964-71) did not translate satisfactorily for British ears, hence the Thompson re-write. Thompson also did all the voices for the characters, who were:

The catchy theme tune was composed by Frenchman Alain Legrand. In the UK, there are at least four towns that have a complex road junction dubbed ‘the magic roundabout’ after the programme. The traffic at these spots moves slowly, thereby reducing accidents.