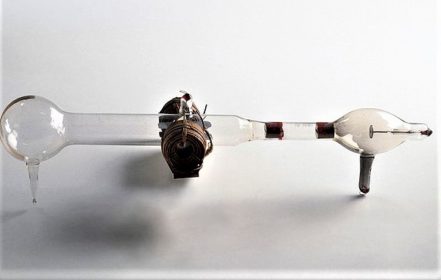 Sir Joseph John (‘J.J.‘) Thomson was born in 1856 in Lancashire. He excelled in mathematics and took his degrees at Cambridge University, where he became a professor. Always interested in science, in 1896 he decided to start some experiments with cathode ray tubes, to which he applied electrical and magnetic fields. By analysing the rays’ deflections, he was the first to discover a sub-atomic particle ~ the electron ~ and that it is negatively charged. He published his findings in 1897 and they became known as the ‘plum pudding model’.

At that time scientists believed that the hydrogen atom was the tiniest particle in existence, but Thomson showed that his cathode ray ‘corpuscles’, or electrons, were a thousand times lighter. It has still not been possible to split an electron or even see it, as it circles round the atom’s nucleus so fast and is so stupendously small.

Thomson was awarded the Nobel Prize in Physics in 1906 and was knighted in 1908. It was from his discovery that today’s world of electricity and electronics stems. He died in 1940, three years after proudly witnessing his son, George Paget Thomson (1892-1975), win the same Nobel Prize in Physics for work also on electrons, this time investigating their wave-like properties.