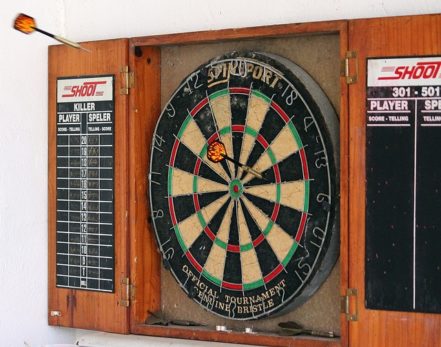 Darts is thought to have originated in the 1500s as an indoor version of archery, hence the term ‘arrows’ for the pointed, feather-ended barrels (darts) that are thrown at the dartboard. This would have been a slice from a tree trunk, with the growth rings and any cracks being used for scoring purposes. This may explain why different dartboard designs developed in different counties.

Another nice theory is that the numbering sequence was devised by a travelling showman from Lancashire, who had a darts game on his stall and wanted to minimise lucky shots. Mathematicians have suggested alternatives, but it would be a major task to change it now, as it is played all around the world. Mathematical ability is a huge part of the game ~ specifically, subtraction and the doubling and trebling of all the numbers ~ since players must instantly calculate winning targets to finish each game.

In the early 1900s it was banned from pubs as being a game of chance, but was demonstrated to be one of skill when this was challenged in court. Darts is still a popular pub game and it has been televised since the 1970s, using split-screen technology to enhance the viewer experience.