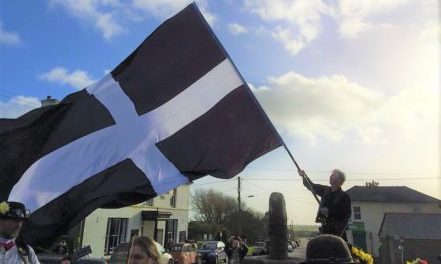 The story of the man named Piran, Pyran, Perran or even Ciarán is debatable but the date he died seems to be agreed by all ~ 5th March 480 ~ and so this marks the annual St. Piran’s Day which is celebrated in Cornwall. Nobody knows when or where he was born, though most seem to think he was Irish or, at a stretch, that he came from South Wales.

The significant points for those who celebrate St. Piran’s Day are that he arrived on a beach in Cornwall, preached there and recognised the presence of Cornish tin, for which he was made the patron saint of tinners. Cornish towns host street processions featuring officials in traditional dress, live music, re-enactments of Piran’s arrival and parades by schools and youth organisations carrying Cornish flags and banners.

Some fanciful parts of St. Piran’s legend are that..