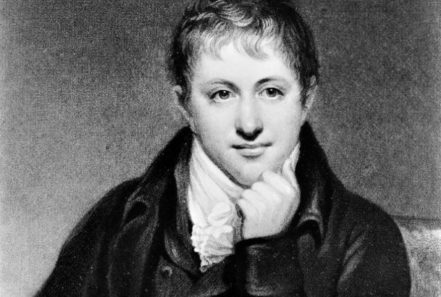 Sir Humphrey Davy (1778-1829) was an extremely talented chemist, poet and inventor. Born in Cornwall and employed in Bristol at the Pneumatic Institution, he first became known for his experiments with nitrous oxide, or ‘laughing gas’, by breathing it in himself. His friends tried it, too! Later, it would start to be used as an anaesthetic in dentistry.

Davy then moved to London in 1801 and succeeded in isolating the elements of sodium, potassium, magnesium, chlorine and iodine, among others, using the newly discovered process of electrolysis. He was also admired as a lecturer and was Professor of Chemistry from 1802 to 1812 at the Royal Institution.

In 1816, he produced a miner’s safety lamp which reduced the danger of explosions caused by naked flames in coal mines. This lamp is known as the ‘Davy lamp’.