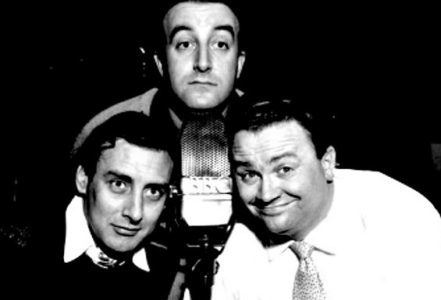 World War 2 brought many cultural changes, one of which was the birth of modern British comedy, led courageously by The Goon Show. From 1951 to 1960, young people in particular listened eagerly to their family radio sets for their favourite characters ~ Neddie Seagoon, Eccles, Moriarty, Bluebottle, Henry Crun, Grytpype-Thynne, Bloodnok, Minnie Bannister and Fu Manchu among them.

The Goons were Spike Milligan (1918-2002), Harry Secombe (1921-2001) and Peter Sellers (1925-80). Michael Bentine (1922-96) was a founder member but left after two years. They had all served in the armed forces during the war and the comedy gods brought them together afterwards. The BBC did not like the name ‘Goons’, so the first series was called ‘Crazy People’, clearly indicating their opinion of them!

There were 250 episodes over its ten-year existence, all of which were written by Spike Milligan, whose creativity was so zany that he had a hard time with the BBC traditionalists until it achieved its huge success. Part of its innovation was the use of new technology to create sound effects. Comedians today acknowledge the great legacy of the show and it is still repeated frequently on BBC Radio 4Extra. Its surreal situations, playful language and Secombe’s giggling are the stuff of comedy genius.