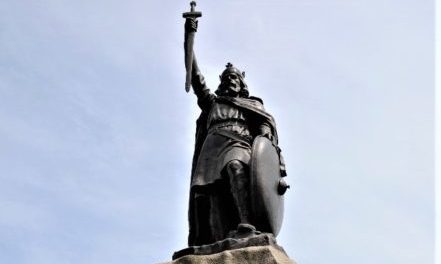 Alfred the Great (849-99) was the grandfather of the first King of England and did much himself to unite the people at a time when the Danes were threatening to invade the whole country. His leadership, along with his reforms to education, law and tax, laid the foundation for English culture and earned him the accolade ‘the Great’.

Alfred (or Aelfred) was born in Wantage and had four older brothers. His father, who was King Aethelwulf of Wessex, a Saxon kingdom, died in 858. The first three brothers then reigned and died in quick succession. By 870, Alfred was fighting alongside his fourth brother, Aethelred, in a series of battles against the Danes. Some were won, others were lost and Aethelred died shortly after the Battle of Marton in 871, leaving two infant sons who were too young to rule, so Alfred stepped up.

After losing a few more skirmishes, Alfred decided to pay the Danes to retreat back to London, but in 877 they made a surprise attack on him at Chippenham. He escaped to the marshes of Somerset, where he built a fort at Athelney. He amassed more men for his army and finally defeated the Danes at the Battle of Edington in 878.