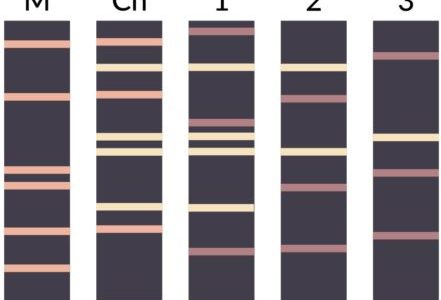 In 1984, Professor Sir Alec Jeffreys (1950-) realised that each DNA ‘bar-code’ he was studying was unique to each donor and that their patterns were inherited from the parents. He was researching DNA variations in animals at his University of Leicester laboratory when, by chance, on checking his technique on a colleague’s family, he produced the very first DNA ‘fingerprint’.

It was so named because top of the list of possible applications was forensic crime-scene investigations, in the same way as fingerprints are used. Only identical twins have exactly the same DNA, so these applications include parent-child identification in paternity suits, immigration applications and family tree mapping, as well as DNA matching on criminal evidence collected by the police. Samples are taken from blood, sweat, semen, hair, saliva, skin or bone cells.

Professor Jeffreys’s discovery was in demand by lawyers straight away and by the police from 1986. In their first case, it prevented an innocent man going to prison. There is now a National DNA Database holding six million records of the relevant part of the DNA for anyone who is arrested. It does not hold the full DNA profile as that would be unethical. From 2001-2018 it found 675,000 matches for police purposes.