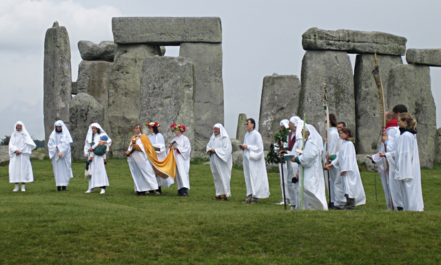 The ancient Druids were priests and judges in Britain and Ireland in the centuries before Christianity was disseminated. They did not leave any written records, so our meagre knowledge of them comes mainly from folklore, and from the Romans and Greeks, who claimed that they carried out human sacrifices. The Romans massacred the last group of Druids on the Welsh island of Anglesey.

Modern-day Druidism, or Druidry, started as a cultural revival in Britain in the 18th century. In 2010 it was officially recognised as a religion, although it could more aptly be described as a “spiritual path“.  There are estimated to be between 20,000 and 40,000 committed followers, with many thousands more being interested enough to buy books and search for online information on the subject.

There are many ways to practise Druidry, but essentially it is recognising and celebrating humanity’s connection with all of Nature. There are eight important dates on the Druidic calendar, the most famous of which are the Summer and Winter Solstices, since these are marked by gatherings at ancient stone circles and henges such as Stonehenge in Wiltshire.

(Image of Druids at Stonehenge: sandyraidy at Wikimedia Commons / CC0)