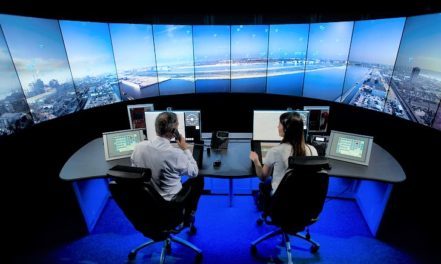 The Royal Radar Establishment in Worcestershire, set up in 1953, was responsible for many innovations in computer science, one of which was the touchscreen. In the early 1960s, one of their engineers, Eric Arthur Johnson, was investigating ways to assist Air Traffic Control to respond more quickly to the flight information displayed on their recently introduced computer screens. Bypassing the keyboard and interacting directly with the monitor was a solution which was adopted and is still in use in control towers today.

In 1965 Johnson registered a patent through Aviat UK and published an article on his idea, entitled ‘Touch display – a novel input/output device for computers’ in the journal Electronics Letters. By 1967 he had constructed a prototype and was able to include diagrams and photographs in his second article, ‘Touch displays: A Programmed Man-Machine Interface’ in the journal Ergonomics.

His design was for ‘capacitive touch’, which is the concept employed in smartphones, although Johnson’s screen could only cope with one touch at a time. A toughened glass panel is coated and layered with a grid of touch points and very thin copper wires. Pressure from the finger produces a local change in the electric charge which is communicated to the processor.