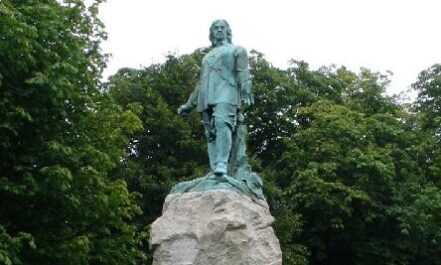 The role of the monarchy has changed radically over the ages and the public execution of King Charles I (1600-49) set a precedent that is credited with constricting any subsequent tendency towards tyranny. Oliver Cromwell (1599-1658) from Cambridgeshire was one of the parliamentarians who signed the King’s death warrant and it was he who led the country as its ‘Lord Protector’ in its first spell as a republic (1653-58).

However, the old ways lingered on and his son Richard (1626-1712) inherited the job, in true bloodline fashion. Having no training or fellow republican heads of state to emulate, he resigned in 1659 and the monarchy was restored in 1660. The new king, Charles II (1630-85), revengefully ordered the exhumation of Oliver Cromwell’s body from Westminster Abbey and the setting of his head on a spike for all to see. The Irish also hated Cromwell for massacres perpetrated at two of the 28 Irish towns he and his army overran in 1649-50.

The 1,200 laws Cromwell introduced were binned as not having received Royal Assent. Nevertheless, his legacy included a new religious tolerance which could not be suppressed even after his death. He was himself utterly driven by his Puritanical beliefs and was probably a man of ideals corrupted by power.