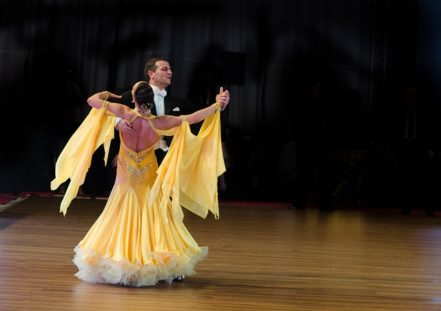 ‘Come Dancing’ first appeared on British TV screens in 1949 ~ a time when people were ready to engage in light-hearted pastimes once again, after the end of World War 2. In its first few years, its aim was to teach the viewers the different ballroom dance steps. From 1953 onwards it took on a competition format, awarding trophies to the best couples and regional teams.

The female dancers’ glamorous dresses were always a key attraction of the show, even before the advent of colour television in 1966. Puffy skirts, sequins, rhinestones and feathers were described in detail by the show’s presenters, including information such as “.. all hand-sewn by her mother”.

The venues included the Locarno Ballroom in Coventry, the Lyceum in London, Blackpool Tower and Winter Gardens and finally, Bournemouth International Centre until the final run in 1998. Six years later, the BBC decided to bring the show back with a celebrity element and re-name it ‘Strictly Come Dancing’.