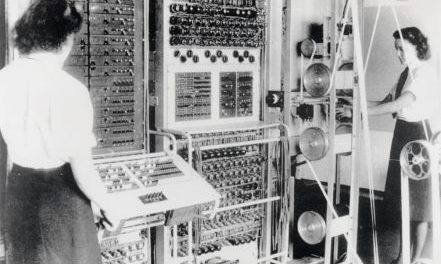 The ten Colossus machines built at Bletchley Park during WW2 were the first electronic programming computers, albeit for one specific purpose ~ the decoding of secret German communications. It is thought that their success in 1944, particularly around the time of D-Day, shortened the war by two years. Eight of the machines were dismantled immediately after the war and two continued to be used by British Intelligence until the 1960s. The one on display at the National Museum of Computing is a working replica.

Bill Tutte (1917-2002) was a man inspired when he broke the code being generated by Dr. G. Grimsen’s Lorenz cipher in Germany and deduced the design of the machine producing it. Max Newman (1897-1984) commissioned Tommy H. Flowers (1905-98) to assemble a corresponding machine by which to reverse the process and read the messages.

Flowers chose to use 2,500 valves and keep the machine running 24/7 to protect them from breaking. This was unheard of but it worked. Colossus was able to read 5,000 characters per second, generating so much heat that the WREN operators often stripped to their underwear! Tutte, Newman, Flowers and their team are unsung heroes, as the post-WW2 Cold War meant that their work remained classified for decades.