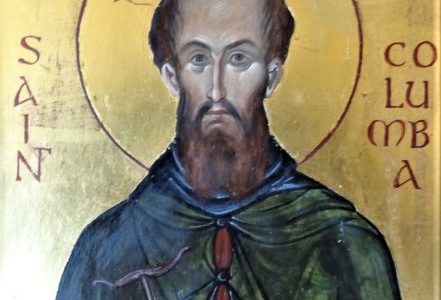 St. Columba (521-97) was born into the Irish aristocracy and was educated at a Christian monastery, after which he became a monk himself and then a priest. Thanks to his family connections, he was occasionally given land on which to found a new monastery. The most famous of these was on the tiny island of Iona off the west coast of Scotland, but the first one was in Derry, where St. Columba is the patron saint.

Many myths and tales grew up around his missionary work, attributing him with miracles and clairvoyance. They resulted in a cult following and a community of monasteries and churches of the Columban order, including Lindisfarne, Kells and Durrow. Iona became a place of pilgrimage for early Christians, though no women were allowed there in his lifetime. It is said that he also banned frogs, snakes and cows!

A huge bonus in his energetic efforts to convert Scottish pagans were the new skills of reading and writing, which he and his monks were able to teach and use to record historical facts and to compose hymns and poetry. They excelled in the art of ‘illuminated manuscripts’, ‘The Book of Kells’ being one example.