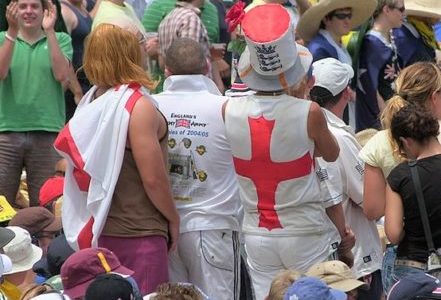 The Barmy Army is a large group of exuberant supporters who follow the England national cricket team at home and abroad. What differentiates them from other supporters is their outwardly fun-loving approach which becomes more noticeable as the day wears on.

“Barmy Army” began as a football chant but was quickly taken over by English cricket fans. A group of them travelled all the way to Australia for the 1994-95 Ashes tour, which England lost as expected, so the Australian media picked up on the ‘Barmy Army’ tag (‘barmy’ means daft). Two hundred custom-made T-shirts later, the name had stuck.

Far from being a disorganised rabble, Barmy Army Ltd was incorporated in 1995 and sorts out tickets and travel for its members, along with donations to charity. Its rules stipulate that good-natured, clean fun is the order of the day, with no swearing or disrespectful behaviour. Most cricket grounds have a special section for the Barmy Army, both to facilitate their activities and, it must be said, to allow other spectators to sit far away if they wish! Fancy dress, beer-drinking, banter, songs and the trumpet-playing of Billy Cooper are not everyone’s cup of tea.