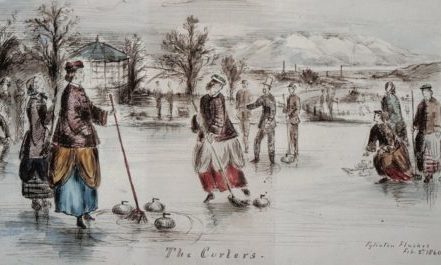 One of the world’s oldest sports, curling has some special features that remind us of its 16th century Scottish origins. It is played on a frozen ice surface with brooms and polished granite stones, or ‘rocks’. Add to this the self-policing element and the shouting of instructions and it is easy to imagine the scene taking place on a loch or pond in the depths of a northern winter.

The two teams of four wear shoes that enable smooth sliding on the pebbled ice ‘sheet’ and the ‘skip’ is in charge of each team’s strategy. Players, called ‘curlers’, need good balance, both for sliding off from the ‘hack’ and for leaning heavily onto their brooms and brushing to assist the desired speed and direction of the rock. A slight twist on release makes the rock spin or ‘curl’ its way down to the target area, the ‘house’.

Other northern countries like Canada have taken up curling and there is a World Curling Federation based in Perth. The first curling clubs were in Scotland and the rules were drawn up by the Grand (later Royal) Caledonian Curling Club, founded in 1838 in Edinburgh. Curling became an official Winter Olympics sport in 1998.