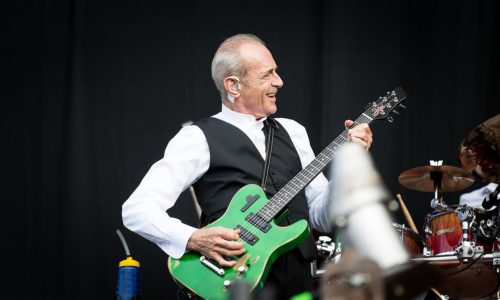 Rock band, Status Quo, first formed in London in 1962 as The Scorpions and they are still performing today. Founder member, Francis Rossi, OBE (lead singer, guitarist and songwriter) has only recently had his trademark long pony-tail shorn. He is also known for his waistcoat and his green Telecaster guitar, though this, too, had to be replaced recently after more than forty years’ service.

They have had more hits than any other band in the UK and have sold over 120 million records worldwide. Their uncomplicated style has drawn derision from some highfaluting critics, but this is exactly what appeals to millions of fans. ‘The Quo’ give them good-time, classic, structured, solid rock. They even have their very own headbanging, shoulder-swivelling dance move, beloved of old rockers!