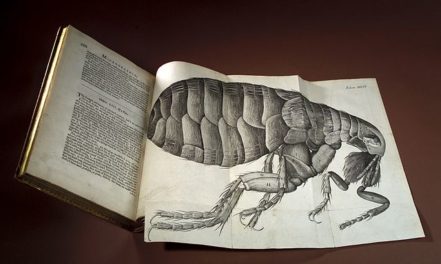 A genius of his time, Robert Hooke is known today for Hooke’s Law, as explained in this video by ‘GCSE and A Level Physics Online’:-

Robert Hooke (1635-1703) was born on the Isle of Wight and soon showed a talent both for handling delicate mechanisms, like those of clocks, and for drawing. He went to Oxford University and later became the first Curator of The Royal Society of London (for Improving Natural Knowledge), a very demanding position but one which enabled him to develop the emerging field of experimental science. Indeed, he is said to be its ‘father’.

In 1665 he published the ground-breaking ‘Micrographia’ (see featured image), for which he was the author-illustrator. This was an amazing collection of things he had seen through the newly-invented microscope (to which, of course, he had added his own improvements!). It was in this book’s text that the term ‘cell’ was first used for the building blocks of a creature or material. Sadly, Hooke’s wide-ranging investigations led to a clash with the up-and-coming Isaac Newton, who rather spitefully destroyed Hooke’s possessions after his death.