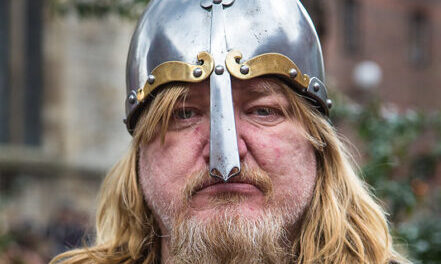 During the Vikings‘ explorations spanning N.America to the Middle East, Britain did not go unnoticed and in fact proved quite a draw for some 250 years until the Norman Conquest of 1066. ‘Viking’ is a later name applied to these Scandinavian adventurers from across the North Sea. Their first incursions, in the 790s, were violent thefts and murders at soft targets ~ the monasteries of N.England, Scotland and Ireland.

The impressive sight of the distinctive Viking longships powering their way towards shore became a regular sign of pillage and upheaval each summer, until they eventually decided to settle here in the 850s. They took control of various kingdoms in the upper part of Britain, approximately above a line from London to Bedford. Wessex in the south stood firm and King Athelstan defeated them in 927, thereby uniting the country of England.

Eirik Bloodaxe (typical Viking nickname ~ others include Bluetooth, Ironside, Skullsplitter, Boneless, Red, Buttered-Bread) had briefly retaken Northumbria but was killed in 954. Back for more in 1013, the Vikings now tussled for total rule and for a while had the Danish King Cnut (or ‘Canute’) on the English throne, in 1016-35. Naturally, they left their mark culturally, linguistically and in the family trees of many Britons.