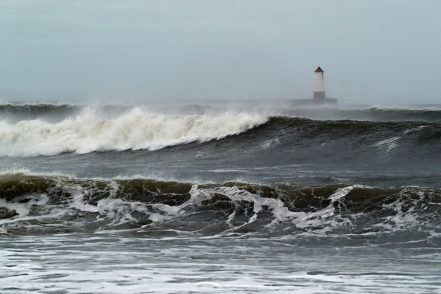 The British Isles are surrounded by the natural resource of the sea, making the possibility of producing electricity from wave energy an obvious path of investigation, one would think.

Professor Stephen Salter of the University of Edinburgh patented a wave energy converter, known as Salter’s Duck in 1974. The concept was that a line of very large, linked capsules would float in the sea and their bobbing motion would create kinetic and potential energy. Here is one duck at the experimental stage:-

Curiously, the government decided not to fund its development. Subsequent projects by other organisations involved with harnessing wave energy also eventually closed down for financial reasons.

Wave Hub Ltd in Cornwall and Pembrokeshire provided the world’s biggest and most technologically advanced facilities for other companies to come and test their own wave energy devices, but it was transferred to Cornwall Council in 2017 and unfortunately never contributed any electricity to the National Grid. It was then sold in 2021 to a Swedish wind turbine company, putting an end to that particular avenue of energy solutions.