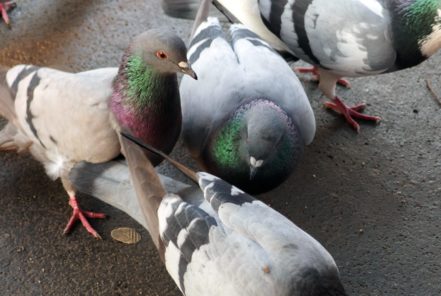 Pigeons seem to gravitate towards humans and are quite tame. Their natural habitats are cliffs and coastal areas, but they are equally happy in crowded cities. Trafalgar Square in London used to be famous for its flocks of pigeons, encouraged by people feeding them corn and seed from the sellers who had their pitches there.

In 2000, London’s Mayor decided to rid the Square of its iconic feathered friends and today there are hawks ensuring that it remains pigeon-free. This is sorry thanks for the debt we owe to the hundreds of thousands of pigeons that were used in the two World Wars to carry vital notes between commanders, saving many human lives.

Pigeon racing is dependent on this same homing instinct and it became a very popular sport in the 1900s. At its peak in around 1960, there were 170,000 pigeon fanciers in the UK.

The bird’s attractive plumage and direct gaze charm many people into putting out seed for them on a regular basis. However, this can lead to increasing numbers, so the best advice is to leave out a few handfuls no more than once every three days and in different places around the garden.