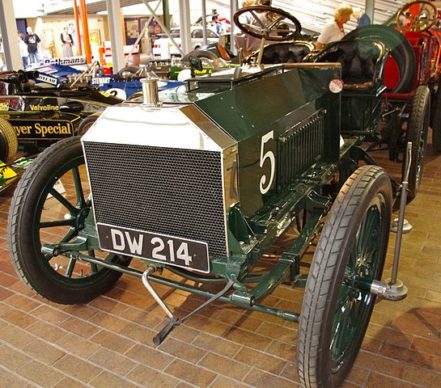 Napier cars were the first to adopt the colour known as British Racing Green (BRG) for their livery. They were among the first cars in Britain, being produced from 1900 to 1925. Their salesman, Selwyn Edge, had the idea of entering them in international city-to-city races in order to showcase their superior performance.

Dark green was commonly used for trains and other large machinery in British factories, so this was also used for the Napiers. It is thought that this was consolidated in 1903 when one of the races was held in Ireland, where at that time there were only a few hundred cars in the whole country. Special laws had to be passed by Parliament to allow for the race to take place on public roads, including permission to drive faster than the statutory 12mph when between villages. The story goes that it was in grateful thanks that the Irish green was chosen to represent Britain.

There is no standard hue for British Racing Green and it was not until the 1950s that it became quite dark, but it is reminiscent of those early motor-racing days, since from the 1960s onwards it has been been replaced by the sponsors’ brand colours.