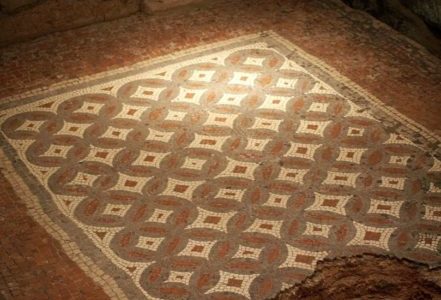 It has long been taught in UK schools that the Romans transformed the country with their civilising influence and were here for four hundred years, after which we fell into the so-called Dark Ages. Today, archaeologists and historians are uncovering quite a different picture of pre-existing Iron Age farming and skilled crafts continuing during and after the ‘Roman Britain’ period.

The Romans first attempted a landing in 55BC, then 54BC, but were beaten back by the clever tactics of a smaller army. The rest of Europe was in Roman slavery but the British stood firm until 43AD. However, the invaders did not enter Wales until thirty-one years later and never took Ireland or all of Scotland. Initially, they faced fierce opposition, not least from Queen Boudica‘s army, but wealthy Britons would later intermingle and avail themselves of exotic Roman artefacts, such as mosaic flooring.

Until 409AD there were varying levels of Roman presence, including lengthy absences. Whilst here, they murdered Druids and Christians for fear of them emboldening the proletariat with their fancy talk of immortal souls. On the plus side, they introduced many new vegetables, constructed two-horse-width road lanes, and  brought us the magnificent domestic cat!