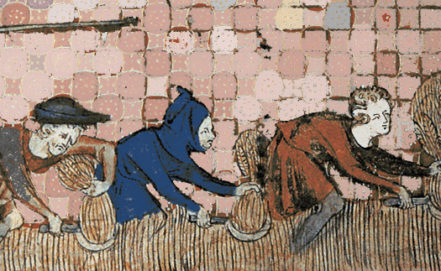 The feudal system prevailed in Britain between 800 and 1500, when a government with centralised control became the new method of ruling the country. Feudalism had served its purpose well, but after the catastrophe of the Black Death, the Peasants’ Revolt and the revelations being made by science and exploration of the globe, societal changes were inevitable. The growth of towns and cities gave alternatives to rural life.

The mediaeval belief was that there was a hierarchy of closeness to God ~ the Pope, then the King, dukes, earls, barons, knights and, at the bottom, peasants. The monarch was, and still is, the absolute owner of the country’s land and everyone below him or her was/is a tenant. The term ‘freehold’ comes from the feudal system and means that your tenancy is indefinite.

Under feudalism, peasants were given a cottage and up to five acres of farmland, usually by a baron, in return for food, taxes and membership of the baron’s private army, signified by a ceremonial oath of fealty and homage. This type of relationship was replicated up the chain to the King. At a time with no welfare state, police or judiciary, this was a sensible, mutually beneficial community arrangement.