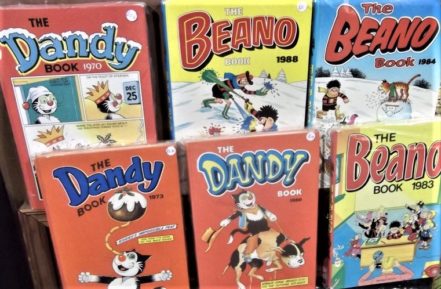 Dundee publishers D.C. Thomson & Co. produced both ‘The Dandy‘ and ‘The Beano‘ from 1937 and 1938 respectively, with ‘The Dandy’ being cancelled in 2013 while ‘(The) Beano’ carries on to this day. This makes it the longest-running weekly comic in the UK. Wartime rationing of paper and ink meant that they were temporarily issued on alternate fortnights. The price of the early copies was 2d..

They primarily appealed to schoolboys, with their comic-strip stories of pranks, mischief, slapstick and tomfoolery, all of which result either in punishment, such as caning, or reward, always in the form of masses of food! Even after getting through several ‘cow pies’, the characters are still hungry, especially the huge hulk of a man, Desperate Dan.

Dennis the Menace first appeared in The Beano in 1951, when both comics were at their peak circulation of two million copies each per week. Their attraction is in the hilarious naughtiness and rudeness of the characters, which is never immoral and always has a consequence. Minnie the Minx, Lord Snooty, Gnasher, Korky the Cat, Billy Whizz, Roger the Dodger and the Bash Street Kids, to name but a few, made children laugh and learn what not to do, if nothing else.