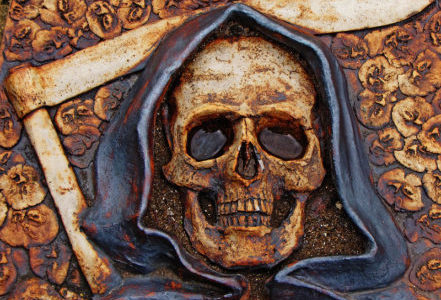 The years 1348-50 saw the greatest loss of life in British and European history, when twenty to fifty million people died, both rich and poor. To the bewildered population, the Black Death was seen as God’s punishment for their sins. How terrified they must have been on witnessing their loved ones die horribly within five days of the first sharp tingling sensation transitioning to their rotting, putrid skin turning black.

We now know that the disease was bubonic plague, carried by rats’ fleas, but people believed that humankind was being wiped out in an apocalypse. Some of them threw morals aside and debauched themselves, while a few were heroic. Crowds flocked to the churches for salvation, but many clergy ran away or died themselves. Graveyards were extended to accommodate mass graves.

The Black Death arrived first in Weymouth, Bristol and London, where a boundary wall was built, but this failed to shield its inhabitants. Herbs and scented posies did not work either. Eventually, it was realised that it was being imported on trading ships and that homes needed to be more hygienic, but the plague returned every few decades until it culminated in the Great Plague of London in 1665.