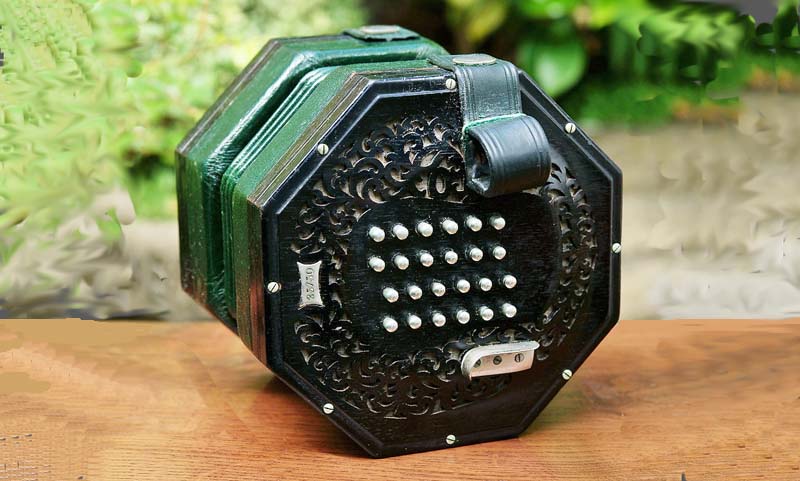 Sir Charles Wheatstone (1802-75) from Gloucestershire is best known for the ‘Wheatstone bridge’, a device for measuring electrical resistance, though he can only lay claim to its practical development and not the idea itself, which properly belongs to Samuel Christie (1784-1865). However, Wheatstone did invent both the symphonium and the concertina and his birthday, 6th February, was chosen for the annual ‘World Concertina Day‘. Indeed he patented two types of concertina ~ the English, in 1829, and the Duet, in 1844.

Wheatstone was from a musical family and his studies in physics led him in 1827 to devise the kaleidophone to visually demonstrate the different vibrations for different notes. He then experimented with reed instruments and this first resulted in the symphonium, similar to the mouth-organ but with buttons on two sides.

Next came the 4½-octave English concertina with the advantage that the blown air was produced mechanically by bellows, leaving the player able to sing along. The 48 buttons on the English alternate the diatonic tones between the two sides, whereas the Duet has all the lower notes on one side and the higher notes on the other. Being small and portable, concertinas are popular for travelling performers such as Morris dancers and the Salvation Army.

(Image of a Wheatstone concertina: Peter Trimming at Flickr.com / CC BY 2.0)