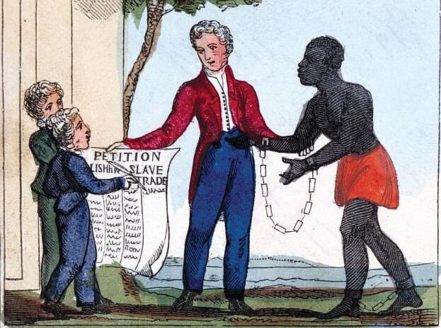 William Wilberforce (1759-1833) was an MP who tirelessly campaigned for the abolition of slavery on moral grounds. He finally achieved his aim just three days before he died, with the final stages of the Slavery Abolition Act successfully passing through Parliament. It came into force in 1834 and applied to almost all of the British Empire, with the remaining colonies following later.

The Society for the Abolition of the Slave Trade was formed in 1787 and was one of the influential voices which led to this result. Others included the Quakers and more than five hundred public petitions. The initial step was the abolition of the horrific slave trade itself in a series of Slave Trade Acts starting in 1807. The next step was to free 800,000 people already held as slaves.

The main objection from opponents was that abolition would ruin the economy of the West Indies, the main destination of captives brought from Africa. Consequently, the Act included financial compensation for the plantation owners and provision for freed slaves to be apprenticed in a transitionary period which ended in 1838. Some members of the anti-slavery movement wanted to continue their lobbying in other countries and the current organisation is called Anti-Slavery International.