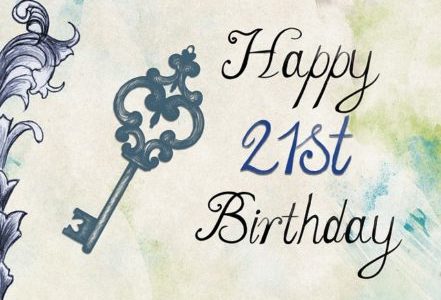 The Family Law Reform Act of 1969 lowered the traditional ‘age of majority’ from twenty-one to eighteen, as from 1st January 1970. Until then, twenty-one was regarded as the age at which you became an adult, symbolised by being given a key to the family home, as in the popular song:-

This is why many 21st birthday cards and fancy gifts feature a key and it is still seen as a milestone birthday, especially as it is the age at which most university students finish their degrees.

At twenty-one, you can apply to adopt a child, supervise a learner driver (if you have held a full driving licence for three years), apply for various flying licences, and apply for a provisional HGV, bus or coach licence. There remain a few transitionary stages: you move up to the 21-24 age band for the Minimum Wage; and if sentenced to prison, you will be sent to one that holds people aged 18-25, rather than a full adult prison.