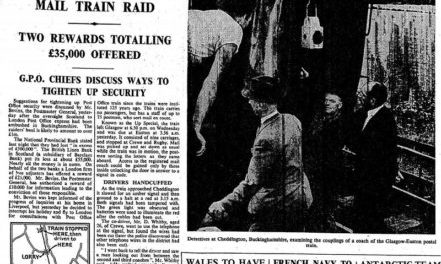 Bruce Reynolds (1931-2013) and Gordon Goody (1930-2016) masterminded the audacious Great Train Robbery, which took place on 8th August 1963 in Buckinghamshire and netted some £2.5 million in cash. Essential to their plan was the inside knowledge of a Post Office employee, nicknamed ‘The Ulsterman’ and eventually named in 2014 as Patrick McKenna.

It was McKenna who supplied the information that the train from Glasgow to London on the 8th would be carrying more cash than their original choice of the 7th and it was McKenna who knew that there were no alarms yet fitted in the carriages. He was never caught but most of the 15-strong gang were, after fleeing their farmhouse hideout. They were given sentences of up to 30 years, though most served no more than 10.

They made several mistakes, one of which was knocking the train driver unconscious with a crowbar. The poor man was then woken up and forced to drive the front carriages to their unloading spot at Bridego Bridge because their own retired train driver, recruited by Ronnie Biggs (1929-2016), was not familiar with the new controls. Biggs was one of the minor gang members but became the most famous, as he escaped prison and lived abroad for 36 years.