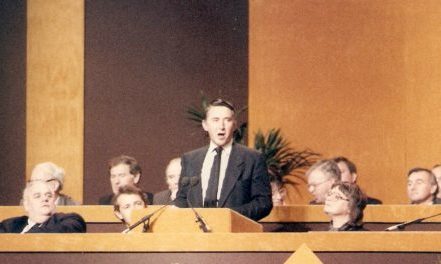 The Liberal Party endured mixed fortunes throughout its existence from 1859 to 1988. At its inception it picked up support from the middle classes who did not feel represented by the Whig Party, which disbanded in 1868 when the Liberals began their first period in control of government. So began the Liberals’ most successful run, during which they achieved some of their major goals, but subsequent internal divisions and the rise of the Labour Party saw their influence fade away.

William Gladstone (1809-98) was a Liberal Prime Minister for a record four terms and, at age 84 when he stepped down, the oldest to date. The last Liberal PM was David Lloyd George (1863-1945) who steered the country through WW1. However, by then the Party had severe splits, leading to the Labour Party becoming the main opposition after the 1918 General Election and positioning the Liberals as a mere third party.

Wedged between the so-called ‘left’ and ‘right’ of politics, the Liberals were seen as being of the ‘centre’ with few policies to call their own. One such policy was the reformation of the electoral system to Proportional Representation which they argued would be fairer (especially for them). The Liberal Party merged with the Social Democratic Party in 1988.