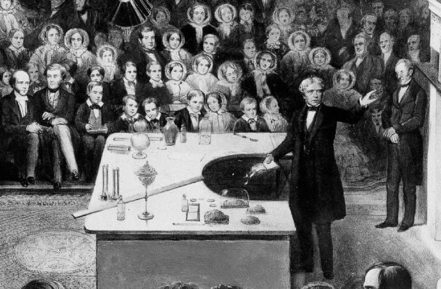 London-born Michael Faraday (1791-1867) is regarded as one of the most brilliant scientists of our time. Yet he came from a poor family and, in his day, pursuing a career in science was unheard of for someone in his situation. It was Faraday’s self-belief and religious drive to do good for the world that pushed him to educate himself and seek out conducive opportunities. This led to a job as Sir Humphry Davy‘s laboratory assistant from 1812 to 1820 at the Royal Institution, through which he met various other leading chemists and physicists and began giving lectures and writing papers.

Gaining promotion in 1821, his important discoveries in chemistry, physics and electrochemistry soon followed. In that year, he discovered electro-magnetic rotation. In 1823 he liquefied chlorine (which led to refrigerators) and in 1825 he isolated benzene. In 1826 he established the Christmas lectures for children. 1831 saw his extraordinary discovery of electro-magnetic induction, leading to the electric motors and generators we depend upon today.

His tireless devotion to his work continued. In 1834 he produced the First and Second Laws of Electrolysis and in 1836 he discovered the principle that allowed the construction of the protective ‘Faraday Cage’. Theories of diamagnetism and the ‘Faraday Effect’ resulted from experiments in 1845.