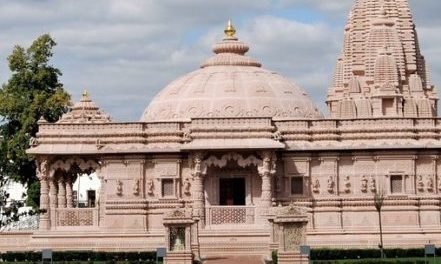 Jainism is one of those religions that, in their purest forms, do not fit in too well with Western society, yet it has also been described as the world’s most peaceful religion. It began in India with the religious teacher Mahavir (599-527BC) and spread to East Africa, eventually establishing a UK foothold from 1972 onwards with Ugandan immigration.

Jain monks and nuns, in their last reincarnation before reaching nirvana, must be celibate, disown their family and shun all the trappings of modern life, including electricity, the internet, possessions, cooking and shoes. They travel by foot from place to place and survive on small donations of food. Their head is shaved, they wear white robes, sweep ants from their path and cover their noses and mouths with cloth to avoid inhaling flying insects.

The Jain beliefs centre around graduating from the need to reincarnate. There is no deity but there are spiritual souls, and life is a test of abstinence in order to attain enlightenment. The five Great Vows are of non-violence, detachment, truthfulness, sexual restraint and no stealing. No alcohol, caffeine, tobacco, chocolate, pickles, spices, eggs or meat may be consumed, so they are almost vegan except that milk is allowed.