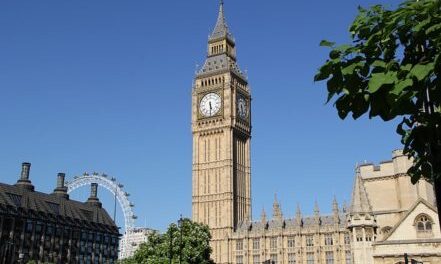 ‘Big Ben’ is the nickname given to the hour bell in the Elizabeth Tower at the Houses of Parliament in London. The Tower’s five bells ~ Big Ben plus the four chiming bells ~ began marking the time every 15 minutes on 7th September 1859. Both the Tower and Big Ben have had their mishaps over the years, but they are probably at the top of most tourists’ must-see lists.

The clock mechanism includes the ‘Double Three-legged Gravity Escapement’ invented by Edmund Beckett Denison (Lord Grimthorpe) specially for Big Ben. It was subsequently used as standard in other turret clocks, as it gives accuracy to one second.

The Tower is leaning slightly, as the foundations are not up to modern standards and London Underground tunnels have been excavated in close proximity. An innovative ‘Compensation Grouting’ technique, developed by Professor Lord Robert Mair, was successfully employed to address this situation. A four-year programme of refurbishment is currently being carried out on the whole of Elizabeth Tower, so Big Ben is silent except for New Year’s Eve and Remembrance Sunday. This is partly to protect the technicians’ hearing.