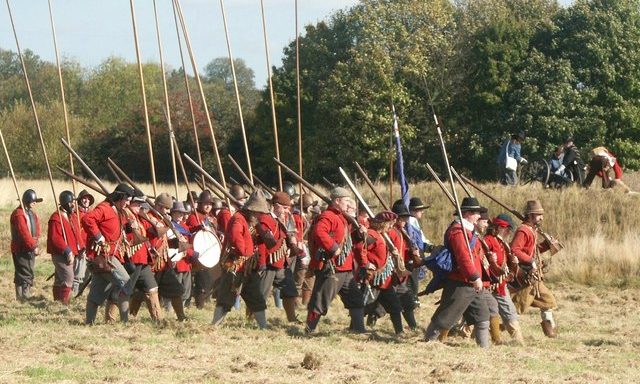 “Across the country as a whole, it was religion which ultimately divided the two parties. Puritans everywhere supported the Parliament, more conservative protestants – together with the few Catholics – supported the King.” (Stoyle, bbc.co.uk/history, 2011)

Parliament’s army, known as the ‘Roundheads’, eventually defeated the King’s forces, called the ‘Cavaliers’, and King Charles I was publicly executed for treason in 1649. This was delayed a few hours while Parliament hurriedly put through a Bill to stop his son (Charles II) from immediately inheriting the throne.

There are several re-enactment societies who commemorate various battles of the Civil War on the anniversary dates. The photograph above shows one such society re-enacting the siege of Bolingbroke Castle in Lincolnshire which took place in the autumn of 1643.