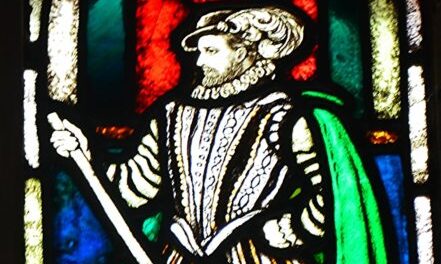 Born in Devon, Sir Walter Raleigh (1552/4-1618) seemed to be following in the footsteps of Sir Francis Drake as a swashbuckling hero, fighting against the Spanish and sailing the Atlantic to explore new lands. However, he caught the eye of Queen Elizabeth I whilst quashing an uprising in Ireland in 1580 and she demanded that he cease his reckless adventures.

She made him a wealthy landowner and knighted him in 1585. He charmed her with his poetry and extrovert personality, but this changed when she discovered he had a wife and baby. She put them in the Tower of London, the first of three imprisonments for Raleigh. After this, he was permitted to venture into the wilds of South America searching for ‘Eldorado’ and gold. He discovered a little gold but no magical kingdoms and on his final trip his son was killed by the Spanish while he lagged behind.

Raleigh is credited with popularising the potato and tobacco, which had been introduced from Spain, and he is viewed as a pioneering explorer to North America, naming Virginia after the Queen, although he mainly sent other people there. His anti-Spanish foolhardiness was his downfall and King James I had him beheaded for treason.