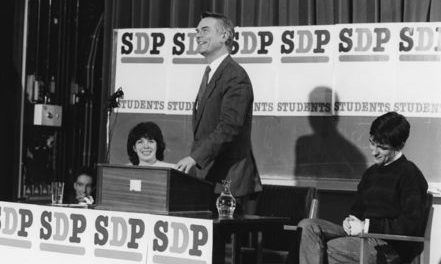 The Social Democratic Party (SDP) was formed in 1981 amid dissatisfaction with both Conservative and Labour parties. The appetite in the country for a ‘middle way’ meant there was support for a new political party which flew both red and blue colours and styled itself as left-of-centre. However, the Falklands War of 1982 saw the Conservative government regaining voters’ trust and the SDP declined over the next few years.

It was set up by the ‘Gang of Four’ ~ politicians Shirley Williams (1930-), Roy Jenkins (1920-2003), David Owen (1938-) and William Rodgers (1928-). More than two dozen Labour MPs defected to the SDP, along with one Tory. The public were more than ready for something new. At one point, the membership statistics of previous party subscription was 25% Labour, 10% Conservative, 5% Liberal and an amazing 60% first-timers.

After just a few months, it made an alliance with the Liberal Party which deflated some SDP supporters who had hoped for a unique manifesto, not one which had to accommodate another party. Nevertheless, the parties merged in 1988. Owen led the Continuing SDP for a couple of years but disbanded it after a humiliating by-election. A third incarnation of the SDP was then set up and is one of the minor parties today.