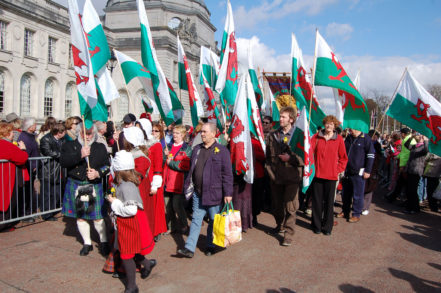 Saint David is the patron saint of Wales, and therefore has an annual day named after him for honouring and celebrating all things Welsh. St. David’s Day is on 1st March, as he is said to have died on 1st March 589. He was born in Pembrokeshire some time in the late 5th century and lived to a ripe old age.

As a bishop, his travels included a pilgrimage to Jerusalem. He brought back a stone slab to use as a sacred object in a new monastery built in 550 and, after that was later demolished, in St. David’s Cathedral on the same site. People celebrate the day by having concerts and parades, and wearing daffodils and leeks ~ St. David was a vegan who only ate leeks and drank water, it is told. His last words to his followers are remembered as:-

Be joyful. Keep the faith. Do the little things that you have heard and seen me do.

sometimes shortened to “Do the little things in life.”