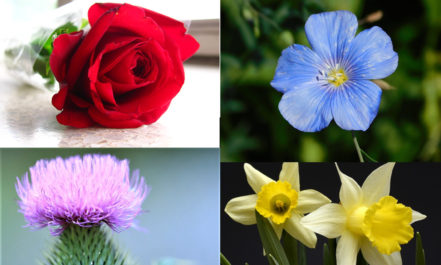 The national flower of England is the rose ~ the Tudor rose ~ which derives from the Wars of the Roses in 1455-85, where both sides had a rose as their symbol.

The national flower of Scotland is the thistle, as its prickly presence on Scottish coastlines is said to have saved the Scots from night-time attacks by the Vikings! The heather is also considered to be a Scottish symbol as, like the thistle, it is perfectly suited to the wet, rugged landscape and grows very happily there.

The national flower of Wales is the daffodil, or ‘cenhinen Pedr’ in Welsh, which literally translates to ‘leek of Peter’. This may explain why the daffodil took over from the leek, though both are still used. Indeed, on St. David’s Day the Welsh Regiment always eat raw leeks, wherever they are in the world.